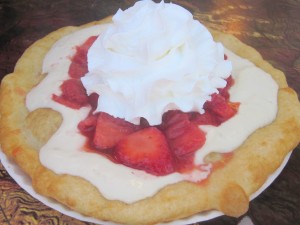 It’s our last Fair Food Friday! And my last weekend to eat the perfect fair meal. I’ve been dreaming about a turkey leg, roasted corn and a big Coke to wash it down. It’s simple, but exactly what I want from the Fair!
So far, this weekly posting has mostly covered savory items. For this last blog, we are going to entirely devote ourselves to the best part of every meal—dessert. The Fair really shines in this department, with many quirky and traditional treats. Here are a few you will want to make sure you sample in our last weekend.

Do you have a favorite dessert at the Fair?

What can be done in 68 days? Well, according to Livestrong.com, you can lose…

WINNER: Beneath the Sea Giveaway

We have a winner for our Beneath the Sea giveaway! Congratulations to Oliver for…

Ahoy, mateys! Today is International Talk Like a Pirate Day, and I could not…