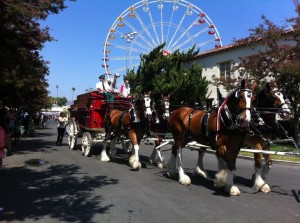 Clippety Clop. Clippety Clop. You probably already know we’ve got horses here at the Fair… the racing kind that run around at Fairplex Park. But we’ve also got a set of horses that are here purely for the delight of fair guests. The Budweiser Clydesdales are making their 26th Fair appearance and are helping us celebrate our community heroes during our weekday parades.
The first thing you notice about Clydesdales is how big they are. Now, horses generally are bigger animals, but the Clydesdales are the biggest of all, standing a foot taller at about six feet at the shoulder and weighing twice as much as a typical horse at over 2,000 pounds.


Budweiser’s Head Horse Supervisor Doug said that these giants of the animal kingdom were originally bred for knights to ride since they were the only thing that could really hold the weight of the armor. Later, as battles were no longer fought with armor, the Clydesdales moved to the farm pulling tractors and ploughs. They became associated with Budweiser because they moved large wagons, which were like the semi trucks of their day, carrying cases of beer from town to town.
The Clydesdales are never far from their trusty companion—Brady the Dalmatian. According to Doug, Dalmatians are loyal companions to the horses, shooing away critters that might spook them.
Doug wants people to know that Clydesdales are gentle, but giant,  so tread with caution. Their large size makes it easy for them to accidentally knock someone over with a tap.

The Clydesdales can be seen in our community heroes parades at 4pm, Wednesday through Friday, and in their stables on Birch Street, near Surrounded by Science.
First one to correctly name the Clydesdales taking up residence at the Fair wins two tickets to the Fair!

Bigger and Better in '09

Happy New Year L.A. County Fair fans! The Fair-ey Blogster and everyone at the…

Still Time to Get Your Photos In

The deadline for the L.A. County Fair’s photography competition has been extended to July…

A Floral Fiesta 200 Years in the Making

Did you know the poinsettia is native to Mexico? I know you all thought…