Neither did I! But after spending a morning with Sky Shivers, the handlebar-mustached Oklahoman cowboy/farmer who coordinates the Fair’s popular FairView Farms, I 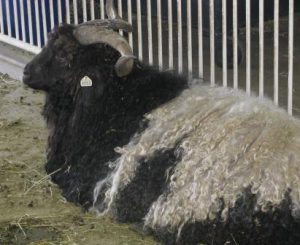 learned a lot of things. And so will you after visiting the Farm. Sky and his “posse” have really boosted the educational foundation of the Farm but you’re having so much fun, you don’t even realize how much you are learning. And isn’t that the best learning of all?
Here’s the scoop: baby goats, sheep and miniature pigs are the stars of the baby animal show inside The Big Red Barn. Bales of hay serve as seating in front of a little stage where a member of Sky’s posse will teach Fairguests how to take care of orphaned animals. The stage setting is repeated throughout various locations of the Barn for several different shows on many different topics like goat milking and sheep shearing.
One of the really cool aspects of the Farm’s education process is the continuity factor. In the cattle pen you’ll see a 1-year-old red heifer named Freedom. Freedom was born here at the Farm last year on Sept. 11. She returns this year as a “teenage girl” and will return next year as a “woman,” ready to have a baby (hopefully here at the Fair). “It’s part of the cycle we want to teach and show  Fairguests,” said Sky.
A cool new a

nimal the Farm has this year is the Caspian horse. The Caspian is the oldest breed of recognizable horse in the world. Sky said they were thought to be extinct but were discovered by a woman in the 1980s, on the banks of the Caspian Sea. “There are only 300 Caspians horses in the United States and 900 total in the world today.” The Caspians are diminutive in stature but colossal in spirit. The horses that you often see heading the chariots in Egyptian hieroglyphics are Caspian horses.
Sky said he believes visitors are going to enjoy the expanded educational programming at the Farm. One of his favorite new areas is the hay baling barn. Sky built an exact replica of a 1896 Sears and Roebuck baler that kids will get to use to bale hay for use in FairView Farms.
And, of course, there are animals, animals, animals! A Dorper lamb was born early Wednesday with many more baby animals expected to make their appearance into the world during the Fair. When we were talking about sheep, Sky mentioned that while the wool industry has suffered from the use of synthetic wool, the U.S. Army chooses to use sheep’s wool in soldiers outfits to protect them in cases of fire from roadside bombings. Synthetic wool burns quickly, sticking to skin. Real, 100 % wool self-extinguishes and could be the difference between minimal injury and third-degree bur

ns.
One other new animal you can see in the Farm is the Zebu – the smallest breed of cattle. It is one of 28 breeds of Brahma cattle from India. Our Zebu is a year old and looks like a calf.
Didn’t I tell you there was so much to learn? And these are just a few of the wonderful things in FairView Farms. When you think about it, us cityfolk know very little about farm life, agriculture, the animals that feed us and clothe us and help sustain the world. Now I’m going back out to the Farm to commune with my barnyard friends.

For some reason, when you look at a wine list at most restaurants you…

Who’s the “Boss” of Marching Bands?

I love a parade. Especially ones that involve the precision and artistry of marching…

Bob Harper, host and trainer on NBC’s “The Biggest Loser,” will make a special appearance…

The Giant Slide – that big, huge wavy banana-like structure near the Flower & Garden…

Most of my favorite holidays involve food and presents; my birthday (it’s a holiday…