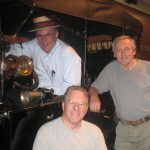 A 1915 Ford Model T Touring Car took its rightful place in this year’s exhibit, From the Industrial Age to the Computer Age: Three Centuries of Artistic Innovation, carefully guided by MSCAF Director Tony Sheets and exhibit builder Nelson Scherer. Right next to the car is an intricate pewter sculpture of a Model T assembly line, with a tiny version of the car rolling off at the end (photo at right below). 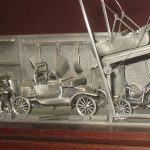 The classic car’s owner Paul Wheeler, architect and Claremont resident, (pictured at the steering wheel with Sheets and Scherer) has owned it for about 30 years. His pride and joy joins working models of other landmark technologies – steam engines, printing presses, weaving looms, cameras and more – to show how new materials – stainless steel, titanium, plastics, synthetic fibers, and acrylics – revolutionized art and expression.
This Model T is just an example of why MSCAF is considered the “Smithsonian West” as this show transports visitors through time from the early 1700s to the 20th Century on a journey of discovery.
Looking on from what is now called “Svenson’s Corner,” sculptor John Svenson had his own Model T memories. “I remember driving one of those down to Chino Airport when I was younger,” he said.

Svenson (at left with Tony Sheets) carved The Ranchero onsite at the Court of the Redwoods at the 1954 Fair. The sculpture towers near the MSCAF entrance today. Svenson will be signing copies of his just-published book, Exploring Forms by John Edward Svenson, an American Sculptor, on the days he is demonstrating wood-carving at MSCAF during the Fair.
Find more information about From the Industrial Age to the Computer Age: Three Centuries of Artistic Innovation here.

Aside from the fun of the carnival, great concerts, educational exhibits and cuddly animals,…

Winning a blue ribbon is one of our Top 10 Fair Dares, and one… 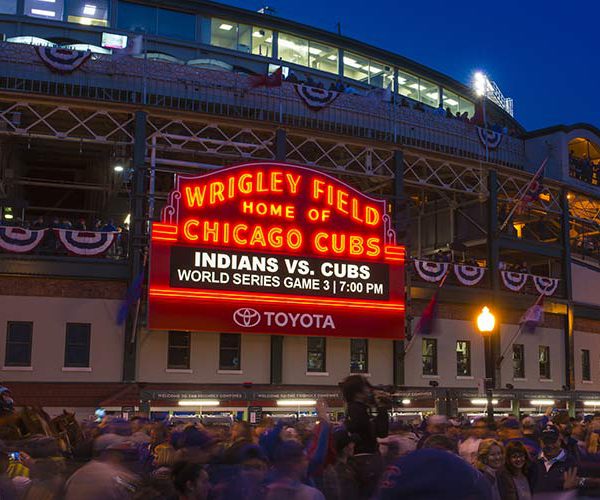 5 Cool Places to Visit Off Route 66

The Mother Road is full of fun and adventure for the entire family!…

Deep-fried, BBQ and Chocolate, oh my!

And the Wiener Is…

Ever see a bunch of short-legged dogs run in thick dirt? Very funny. The…