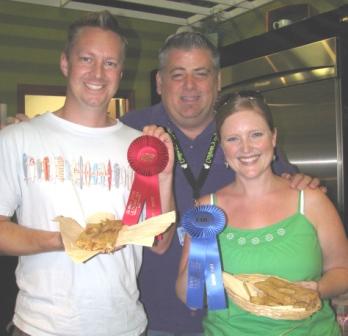 One of the traditions of the Fair is the Culinary contests and competitions – we still give out blue ribbons for Grandma’s apple pie. What’s fun is watching contestants compete against each other at the on-site competitions – especially when the contestants happen to be married to each other.
That was the scenario today at the Tamale! Tamale! Tamale! competition. Camille and Erik Waage of San Dimas arrived with their entries at the same time (well, they did drive together from home). they placed their competing tamales at the judges’ tables. You could see the competitive fires burning inside husband and wife. Ok, fine, they sat together, relaxing and chatting. Sheesh, work with me here, people!
After tasting Camille’s red chile pork tamales and Erik’s Tilamook pepper jack cheese tamales, the judges compared notes. It took only a fe

w minutes of discussion before a winner was revealed: the blue ribbon goes to (drumrollllll) Camille! It was tough, but the judges liked the flavorful pork a little more than the cheese, although they did say the cheese recipe was a good, tasty simple recipe.
The Waages revealed there is no fiery discord in their kitchen. Camille is the true family cook; for Erik, cooking is more of a hobby. Their love of culinary adventures comes from both of their mothers, who, the couple said, are excellent cooks. And both Erik and Camille are previous winners at the Fair. The couple are passing down their cooking abilities and competitive edge to their 5-year-old daughter, who took home a blue ribbon in the Fair’s America’s Kids chocolate chip cookie contest.
The family that cooks together, wins a lot of ribbons!

While we love our cows, goats and sheep, it’s always fun to make a…

Congratulations to Charis for winning our Sea Lion Splash giveaway! Charis will receive 4…

Who Let the Dogs Out?

We did! Well, we are going to. After a successful run last year, the…