Have you seen the Budweiser Clydesdales here at the Fair? They are absolutely beautiful! How can 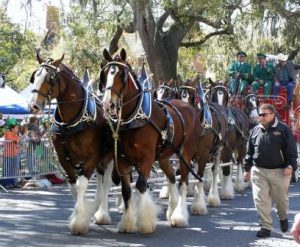 something so large be so graceful? Here is some info:
Known for their gentle temperament, Clydesdales that make the Budweiser team are special in many ways. Each full-grown gelding is 18 hands (about 6 feet) at the shoulder and weighs 2,000 to 2,300 pounds. The ideal Budweiser Clydesdale is bay in color, has a black mane and tail and a splash of white on its face. Each horse must also have the signature white feathering on all four legs and feet. Budweiser’s gentle giants enjoy two meals daily consisting of 20 to 25 quarts of feed, 50 to 60 pounds of hay and as much as 30 gallons of water!
Clydesdale horses hail from Scotland’s Clyde River region in Lanarkshire where they were bred to pull loads of more than a ton at a five-mile-an-hour pace. They came to the U.S. in the mid-19th century to work on farms. In 1933, to commemorate the first bottle of beer produced by Anheuser-Busch after the repeal of Prohibition, August A. Busch, Jr. presented his father with a hitch of the giant Clydesdales pulling a red, white and gold beer wagon. Recognizing the promotional and advertising possibilities,  the company soon made Clydesdales the official mascots of the Budweiser brand. The Budweiser Clydesdale team travels nearly 100,000 miles each year, appearing at county fairs, parades, sporting events and even presidential inaugurations.
A Dalmatian always accompanies the team on its roads trips. The breed was originally chosen to accompany the Budweiser wagons on their delivery routes to protect the horses and guard the wagon while the driver made deliveries. Now Dalmatians serve as mild-mannered companions for the Clydesdales, even sleeping with the horses in their stables. They accompany the team on each appearance, seated beside the driver, and have become nearly as popular and well-known as their giant equine friends.
Pretty cool, aren’t they? See them in the parades Wednesdays through Saturdays and visit them in the Fair home in Palms Marketplace.

Bob Harper, host and trainer on NBC’s “The Biggest Loser,” will make a special appearance…

Cool Things at the Fair

Although the Fair marks the end of summer, the heat hasn’t let up yet.…

Construction is already starting on one of our largest 2016 exhibits: Jurassic Planet. We’re…